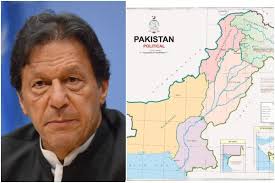 Prime Minister Imran Khan during a nationally televised address on Tuesday unveiled a new political map of Pakistan as it included the entire Jammu and Kashmir including Gilgit-Baltistan as its own. The small print of the decisions made within the Cabinet meeting.

Incidentally, the announcement comes a day before the first anniversary of India’s controversial decision to revoke the area’s semi-autonomy.

The map identifies occupied Kashmir as a disputed territory and states, with the ultimate status is going to be decided, in line with the relevant United Nations Security Council (UNSC) resolutions. It also maintained that the Kashmir issue could only be solved, by following the UNSC resolution, which provides the Kashmiri people with the right to self-determination.

Imran Khan said that this would now be the official map as it has the necessary approved from the federal cabinet and the opposition parties and henceforth would be used for official, academic and international references. It also subtracts the illegal stand adopted by Hindustan last year on 5th August marking its first anniversary of the abrogation of Article 370 of the Indian Constitution and divided the erstwhile Jammu and Kashmir state into two Union Territories.

Shah Mehmood Qureshi, the secretary of state, said the executive maps were introduced earlier too but, this was the first time the representation demonstrated the aspirations of the common people.

It gives a transparent, message to the people of Kashmir that the government of Pakistan was with them in the past and, will stand with them in future. Our destination is Srinagar he said adding this was a historic day.

In an affirmation to China’s compassion, the map does not depict the Ladakh region as a disputed territory except mentioning it as frontier undefined.

The second orientation by the secretary of state was concerning Siachen. He added Siachen was and will be a part of Pakistan and thru the map; we are challenging our right to the world.

The third proclamation was of Sir Creek, Pakistan denies the Indian claims that it goes towards the West “we have denied, that claim and made it clear that our border is on the East”.

Talking at the briefing after the state secretary announcement, PM Imran said the sole solution to the Kashmir issue was through the UN Resolution 39, adopted back on January 20, 1948, and which gave the options to Kashmiris to either merge with Pakistan or India. “India is trying to shift people to Kashmir in a bid to form Kashmiris a minority within the region,”

PM Imran reiterated that his government would raise the dilemma of Kashmiris on every opportunity possible. “The map is one such initiative and, the struggle for Kashmir will move forward,”