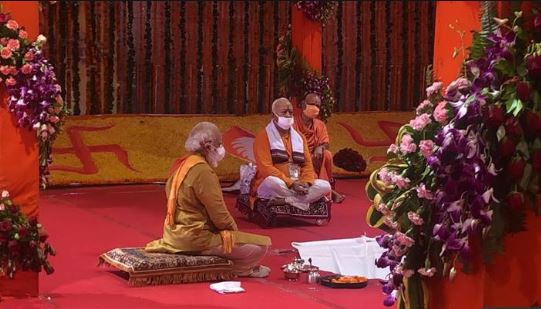 PM Modi at Ram Janmabhoomi ceremony, Ram is everywhere, He belongs to all

PM Modi at Ram Janmabhoomi ceremony, Ram is everywhere, He belongs to all

Ayodhya: Prime Minister Narendra Modi on reaching Ram Janmabhoomi ahead of the grand ground-breaking ceremony in Ayodhya had offered prayers at Hanuman Garhi.

Modi is among the 175 people who were present at the ceremony. He shared the dais with just four other people; RSS chief Mohan Bhagwat, trust chief Nritya Gopaldas Maharaj, Uttar Pradesh Governor Anandiben Patel and CM Yogi Adityanath.

At the Hanuman Garhi temple, PM Modi was gifted a headgear, a silver crown and a stole with the name of Lord Ram printed on it. “Prime Minister Modi is coming and it is a matter of pride for Ayodhya. Many Prime Ministers took office but none apart from Prime Minister Modi came for laying the foundation stone for Ram temple,” the head priest of the temple said.

The temple has been planned in the Nagar ‘shaili’ (a style of temple architecture where the temple tower is built over the sanctum sanctorum), and is far bigger than what had been originally planned. Three more spires have been added, one in front and two at the sides, to extend the gudh mandap (the covered porch); the number of columns has gone up from around 160 in the original plan to 366 (160 on the ground floor, 132 on first floor, 74 on second floor); the width of the stairway to the ‘Ram Darbar’ on the first floor has been expanded from 6 feet to 16 feet. The height of the temple has been increased from 141 feet to 161 feet, its width from 160 feet to 235 feet, and its length from 280 feet to 360 feet.

The unique feature of the Ram Mandir will be the octagonal shape of the sanctum sanctorum, in keeping with the design provided in the shastras for a temple dedicated to Lord Vishnu. The bhoomi and shila pujan will include chanting of mantras, and after shovelling the earth, a worship of the ground and shila. Officials in Ayodhya said 40-kg brick made of pure silver will be used for the bhoomi pujan. Soil has been brought in from more than 1500 places, while holy water has been collected from 2,000 places.

Ahead of the ceremony, Ayodhya has been decked up. The city has been painted yellow – an auspicious colour of knowledge and learning. On Tuesday, prayers were offered to the nishan (flag) of Lord Hanuman, revered as the protector of the city. Starting Tuesday, all local temples started a continuous Akhand Ramayan recitation with temples and homes being lit as in Diwali.

As a BJP worker, Narendra Modi was involved in the Ram Mandir movement since late 1980s. He was the in-charge of BJP veteran LK Advani’s rath yatra in 1989-90. The campaign was based on the claim that the Mughal era Babri Masjid was built after razing a Ram temple to the ground.

Sadhus of Ayodhya began challenging the construction of the Babri Masjid in Ayodhya saying that it was built at “Janmasthaan” – the birth place of Lord Ram. The campaign gained momentum during the second half of 19th century. A local court in 1949 held Hindus, Muslims and Nirmohi Akhada, a body of sadhus devoted to Lord Ram as the joint title holders of the Janmasthaan.

The campaign took political shape during 1980s with the BJP raising the issue with demand that a temple be constructed at the site believed by devotees to be the birthplace of Lord Ram. A massive campaign was built with the help of the RSS and the VHP.

The Supreme Court, though, held that the title of land where the Babri Masjid stood belonged to Lord Ram for being his birthplace. This ruling indirectly held that the Ram Janmabhoomi had been forcibly occupied even if an earlier structure was not demolished.