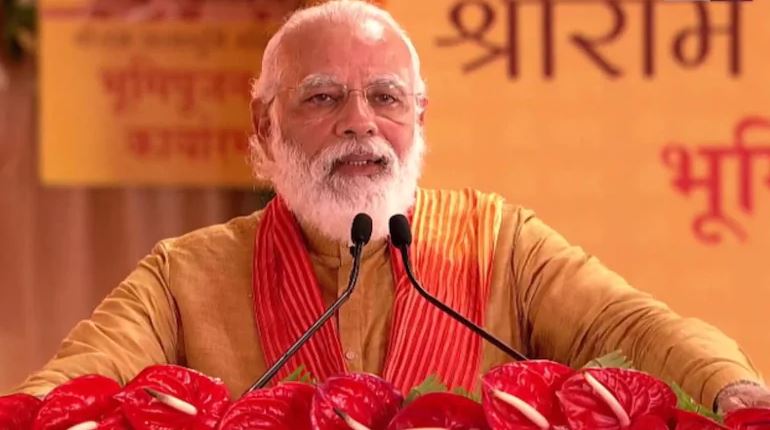 ‘Efforts Made to Eradicate His Existence But Ram Still Lives in Our Minds’, says PM Modi while addressing the gathering in Ayodhya

‘Efforts Made to Eradicate His Existence But Ram Still Lives in Our Minds’, says PM Modi while addressing the gathering in Ayodhya 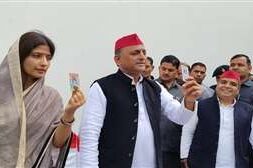 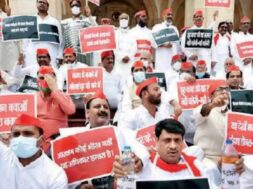 Ayodhya: Prime Minister Narendra Modi on Wednesday performed the ground-breaking ceremony during which he laid the foundation stone for the construction of a grand Ram Temple in the holy town of Ayodhya. The bhoomi pujan for the grand Ram Mandir was held at the exact location where the deity, Ram Lalla rested at the disputed site till a few weeks back.

While addressing a gathering of 175 distinguished guests, PM Modi said, A grand temple will now be built for our Ram Lalla who had been staying in a tent. Today, Ram Janmbhoomi breaks free of the cycle of breaking and getting built again – that had been going on for centuries.

The Prime Minister further said, it is my good fortune that I was invited to witness this historical moment. From Kanyakumari to Kshirbhavani, from Koteshwar to Kamakhya, from Jagannath to Kedarnath, Somnath to Kashi Vishwanath today the entire country is immersed in Lord Ram.

The PM, who began his speech with ‘Jai Siyaram’, said, this call is resonating not only in the city of Lord Ram but throughout the world today. I express gratitude to all citizens of this nation, Indian diaspora across the world and all the devotees of Lord Ram on today’s pious occasion. Every heart is illuminated; it is an emotional moment for the entire country. A long wait ends today.

The PM went on to say “Ram Mandir will become the modern symbol of our traditions. It’ll become a symbol of our devotion, our national sentiment. This temple will also symbolise the power of the collective resolution of crores of people. It will keep inspiring future generations.”

With the construction of this temple, not only history is being made, but is being repeated as well. The way boatmen to tribals helped Lord Ram, the way children helped Lord Krishna lift Govardhan Mountain, similarly, with everyone’s efforts temple construction will be completed.

“I believe that this grand Ram temple to be built in Ayodhya, like the name of Shri Ram, will reflect the rich heritage of Indian culture. I believe it will inspire the entire humanity till eternity. Ram is everywhere, Ram belongs to all”, he said.

Adding to it, Modi said, look at the power of Lord Ram, structures were demolished, attempts were made to erase his existence, but Lord Ram continues to live on in our hearts. He is the foundation of our culture.

We’ll have to remember that whenever mankind believed in Lord Ram, progress happened. Whenever we deviated from the path, doors to destruction opened. We’ll have to keep everyone’s sentiments in mind. We’ve to ensure everyone’s development with support and trust of all.

Ram temple construction is an instrument to unite the country. It will lift the entire region’s economy.

Social harmony was the core principle of Lord Ram’s governance. We have to join stones for construction of Ram temple with mutual love, brotherhood.

Lord Ram teaches us to move ahead with time, he favours change and modernity. “I am confident; we all will move forward, the country will march ahead. And this temple of Lord Ram will continue to inspire humankind for centuries and show them the right path”. 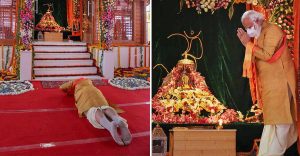 The Prime Minister also unveiled the plaque of Ram Mandir in Ayodhya in the presence of Ram Mandir Trust president Nitya Gopal Das, UP CM Yogi Adityanath, UP Governor Anandiben Patel and RSS Chief Mohan Bhagwat and many others. He also released a commemorative postage stamp on the ‘Shree Ram Janmabhoomi Mandir’.