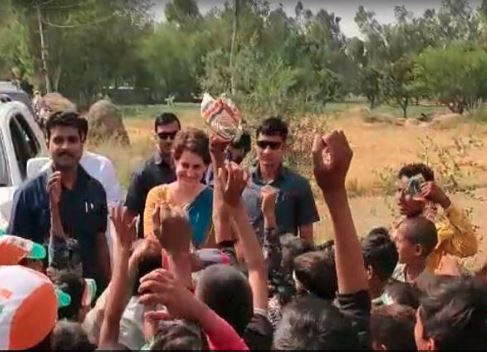 A video that surfaced all over media has come up as a move for high octane campaigning showing politics played with children by Congress. Recently, in the viral video, Priyanka Gandhi Vadra was caught laughing while children raised the slogans of “Chowkidar Chor Hai.”

Reports suggest that this occurred when Priyanka Gandhi was running before her schedule during her visit in Amethi and the children were waiting for her for more than four hours.

The video clip is 12 seconds long, and begins with the children shouting “Chowkidar Chor Hai”. Later in the clip, the children can be heard shouting a slogan calling Modi a pimp. The video clip ends there. The post had been retweeted over 330 times at the time of writing.

Among the prominent people that shared the clip are Union Minister Smriti Irani, who indirectly criticized Priyanka Gandhi, describing the proceedings as “uncouth to the core”. Irani’s tweet was quote-tweeted by actor and BJP MP Paresh Rawal.