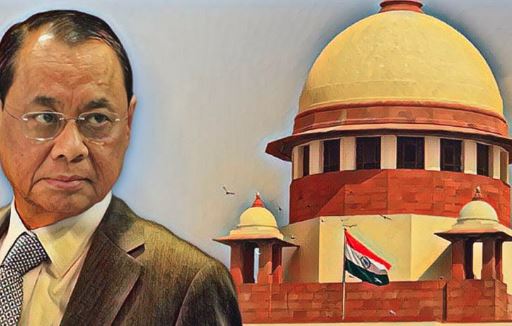 A voluntary organisation has filed a plea in the Delhi High Court asking it to restrain the media from publishing the allegations of sexual harassment against Chief Justice of India Ranjan Gogoi by a former Supreme Court employee.

The petition, which is likely to come up for hearing on April 29, sought immediate restriction on the media from further telecasting or publishing the allegations till conclusion of the three-judge panel’s enquiry.

The plea, filed by NGO Anti Corruption Council of India, said publication of allegations against the CJI directly hits the Indian judicial system. Besides electronic and print media, the plea sought directions for social media platforms.

It should be noted that Justice Indu Malhotra has been placed in the panel of investigation held with respect to the allegations of sexual harassment occurred on CJI.The petition has arrayed as parties the Ministries of Law and Justice and Information and Broadcasting, the Delhi government, the Press Council of India and the Delhi Police Commissioner. Directions have been sought for WhatsApp, Google, YouTube and LinkedInCorporation and news website Scroll.in.

The allegations levelled by the former Supreme Court staff are being enquired into by a three-judge panel of the apex court which held its first proceeding on Friday.
The plea alleged it suspects involvement of “anti-national elements” in this act and if publication of these allegations is not restricted, “people will lose faith in the Indian judicial system”, and the “vast damage” caused to the nation and its people would be “irreparable.”

Something to bring into notice is that Supreme Court had sought an departmental investigation in three sitting judge committee that included Justice S.A Bobde, Justice N V Ramanna and Justice Indira Banerjee. But Justice N. V. Ramanna denied to become the part of this panel. Supreme Court has clearly mentioned that it cannot not work under any powerful or rich. Supreme Court has showed concern regarding being a target since last three to four years.

As an responsible digital media platform WWW.REVOI.IN has never undertaken any kind of coverage pertaining to the news about allegations of sexual harassment on CJI. REVOI has never participated in coverage of these news like other platforms. It is necessary to understand that Indians should not lose faith in the ultimate Justice house of India.

India’s Judiciary has the power to neutrally judge the cases pertaining to the valid evidences. Indian judicial system is respected globally and hence citizens of India are with it without any doubt. Until today there have never been any moral crisis marked as Indian Judiciary and people involved in it are there because of the moral virtues necessary. Hence, such cases when highlighted distorts the perception of people and can be considered as an immoral or unethical step with regards to being a responsible citizen of India.

When the Delhi Rape case occurred Indian Judiciary had efficiently fulfilled its duty. Though, published narratives reflected the political influence and a negative impact was hence created even then. There were comparisons drawn between rape cases in India and other countries, concluding India at higher rate at it. Here the population was not taken into consideration only the rape rates were highlighted. It is high time to create awareness through a neutral and factually correct reporting.

Today, a person at a very senior profile and status of Indian Judicial system has been alleged. Such allegations are with respect to anti national element and pre – planned defamations acts. Under such circumstances media plays and important role to inform citizens of India in such a way that there are no confusions or unnecessary doubts created.

WWW.REVOI.IN is here to ask the Supreme Court about what exactly is the strategy behind such defamation occurring of CJI, is it any political agenda, business oriented influence or any anti national or international conspiracies. Until and unless the entire investigation does not occur media should nopt publish it and nor should as this is an insult to our judicial system.

While there is a concern of a female’s justice, if there is a valid evidence found and investigation confirms that allegations are proved right, then word can be spread accordingly. But unless it is not proved this should not be carried forward as agenda based journalism is promoted and there are many elements becoming a news plants at this age. There are many newspapers, digital platforms and social media platforms have been drawn and caught with this news.

There stands enough surety that if the allegations of the lady are proved right, she shall get justice but until then Indian Judiciary, CJI and Justice are high being defamed that should stop through all ends. Media should act with responsibility. It is an appeal to the Judicial System of India that any such media houses who are defaming the integrity of Indian Judiciary should be asked to stop it immediately. Indian media should keep in mind that the CJI’s personal identity should not be defamed until and unless there are no proofs as this would be an injustice towards all.