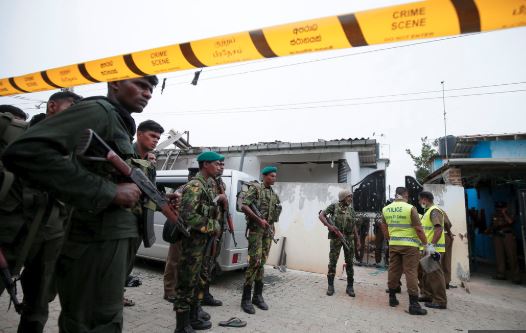 Colombo, Shri Lanka: As an aftermath of Easter Bomb Blasts, there was a Shri Lankan Security Operation taken place in which fifteen people including six children have died at a jihadist safe house near the eastern town of Kalmunai on Friday night. As three cornered suicide bombers blew themselves up and others were shot dead, police reported on Saturday about the security operation.

Police and soldiers fought a gun battle with occupants of the house for more than an hour on Friday night, a military spokesman said, during which three explosions rocked the property near the eastern town of Kalmunai, about 230 miles (370km) from the capital, Colombo.

Security forces have stepped up their searches for extremists after the ISIS group claimed responsibility for the suicide attacks on three churches and three luxury hotels, which killed least 253 people and wounded hundreds more.

There were no casualties among the security forces, the police said. The government has admitted major intelligence lapses, although Prime Minister Ranil Wickremesinghe said he was unaware of any warnings ahead of the attacks, in a sign of the rift between him and President Maithripala Sirisena.

Friday’s clashes came hours after the security forces raided a nearby location where they believe Islamist radicals recorded a video pledge to ISIS leader Abu Bakr al-Baghdadi before carrying out the Easter bombings.

Police said they found an ISIS flag and uniforms similar to those worn by the eight fighters for the video before they launched the attacks. ISIS released the video two days after the attacks.

The head of a local extremist group, Zahran Hashim, who appeared in the video, was killed

Dozens of foreigners died in the attacks and the government has said it expects the number of overseas tourists to fall by 30 percent this year, at a cost of $1.5 billion in revenues.

Finance Minister Mangala Samaraweera said the island — which depends on tourism as a cornerstone of its economy — could take up to two years to fully recover.

Terrorists “may attack with little or no warning”,  it said in a statement that advised citizens to reconsider travelling to the island.

Several nations including Israel, Australia and Britain have already warned their citizens against visiting Sri Lanka in the wake of the attacks.