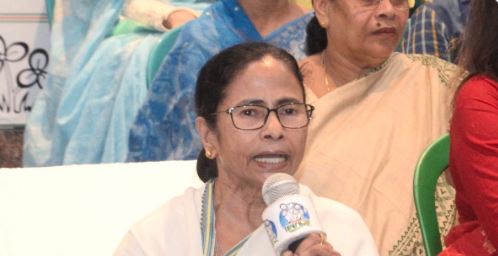 TMC writes to EC over alleged “firing by Central Forces personnel inside a polling booth in Dubrajpur, Birbhum parliamentary constituency”. Letter states, “Central forces have created a reign of terror in minds of voters & have also urged the voters to cast their vote for BJP.”

Letter states, “Central forces have created a reign of terror in minds of voters & have also urged the voters to cast their vote for BJP.”

News agency ANI reported on Monday that in its letter to the poll panel, the TMC has complained about the ”alleged illegal activities of the Central Forces” and accused them of acting on the behest of the state BJP leaders.

”There were various instances where on instructions of BJP leaders, the Central Forces acted in a manner which is not conducive to free and fair elections in West Bengal,” the TMC reportedly said in its letter.

The letter from Mamata Banerjee’s party alleged that the “Central forces have created a reign of terror in minds of voters and have also urged the voters to cast their vote for BJP.”

Modi claims that TMC MLAs will desert Mamata Banerjee after the election results are out. “Your 40 MLAs are in contact with us,” he says.

After Modi’s warning to Mamata Banerjee that 40 TMC MLAs are in touch with him, TMC leader Derek O’Brien accuses the prime minister of horse trading. “Today, we are complaining to the Election Commission. Charging you with horse trading,” he tweets.

The letter from the TMC to the apex poll panel came in the wake of reports of violence in the first few hours of polling in West Bengal, where the fourth phase of elections is underway in eight Lok Sabha constituencies.

According to a senior election official, clashes broke out between the supporters of rival parties in Nanoor, Rampurhat, Nalhati and Siuri areas of Birbhum seat, injuring several people on the two sides.

In Dubrajpur area of the constituency, voters allegedly engaged in a scuffle with the central forces when they were barred from entering the booths with mobile phones.

Security personnel reportedly opened fire in the air to control the mob, following which polling was stalled in the booths, according to the official.

It may be recalled that the BJP had approached the Election Commission on Monday complaining that TMC workers have “hijacked democracy in the state” and again demanded deployment of central forces in all polling booths there.

A BJP delegation, which includes Union Ministers Mukhtar Abbas Naqvi and Vijay Goel, and the party’s media in-charge Anil Baluni, met the top officials of the poll panel here and submitted a memorandum in this regard.

“The ruling Trinamool Congress workers have hijacked democracy in the state and are indulging in violence. They are being supported by the local machinery and we demand deployment of central forces in all polling booths,” Naqvi said.

The BJP also expressed concern about “no action” been taken against Congress president Rahul Gandhi who has been making “baseless allegations” against BJP chief Amit Shah and Prime Minister Narendra Modi.

A total of 1,34,56,491 electorate is set to decide the fate of 68 candidates on Monday in the eight constituencies – Baharampur, Krishnanagar, Ranaghat (SC), Burdwan East (SC), Burdwan-Durgapur, Asansol, Bolpur (SC) and Birbhum.

The EC has deployed 580 companies of central forces to man over 98 per cent of the polling booths in these constituencies to ensure free and fair polling.