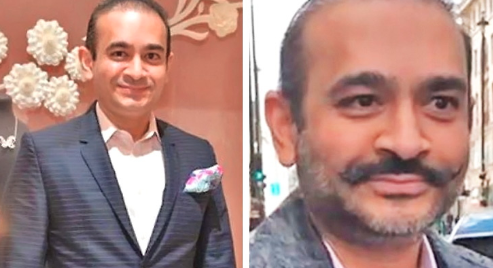 Nirav Modi, the suspect for biggest banking fraud in Indian history and the billionaire diamond tycoon has been caught in London by journalists of The Telegraph. Though, yesterday Nirav Modi’s  illegal bunglow at Alibaug in Raigadh District was blown up, he is caught living in a luxurious apartment in London’s West End. Modi is living in a “three-bedroom flat occupying half of a floor of the landmark Centre Point tower block, with views across London”, likely to be rented at around £17,000 (Rs 15 lakh), the report stated.

The government today said it is waiting for the UK to respond to its request to extradite fugitive billionaire Nirav Modi after British newspaper The Telegraph reported today that he was living in an 8 million pound (Rs. 75 crore) apartment in London.

The news daily claimed that Nirav Modi was living in a luxurious apartment in London’s West End and running a diamond business. Reacting to the report, Congress asked on Twitter why the Modi government failed to track down Nirav Modi when a journalist managed to do the same.

“Why was the Modi Govt unable to do so? Who is Modi trying to protect? Himself, Nirav Modi or the people who let him escape?” the Congress tweeted.

Congress spokesperson Randeep Singh Surjewala also hit out at the Centre on Twitter over reports of Nirav Modi’s luxurious life in the UK.

Taking a dig at BJP’s tag line ‘Modi hai to mumkin hai’, Surjewala wrote on Twitter: “Flee with ?23,000 crore from the country without any problem. Then get a picture clicked with the PM and live a luxurious life in London.”

On this BJP gave a strong reaction tweeting “Nirav Modi’s fraud to cheat the banks started in 2011 when UPA government was in power. It was detected and exposed during the Modi government.”