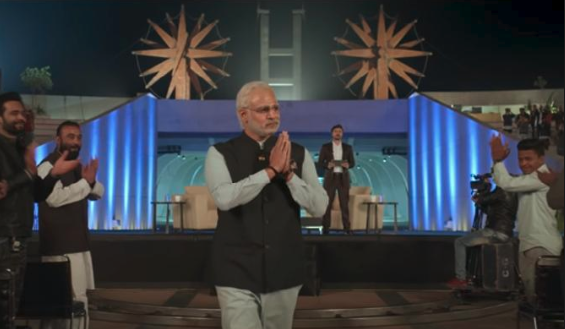 Official trailer on biopic of PM Narendra Modi dropped on Wednesday. The trailer has twirled Twirrati with critics standing high in trolling the film PM Narendra Modi ‘s official trailer. “Modi hai toh mumkin hai” – if it’s Modi, it’s possible. That was a common refrain by the actors and crew who addressed a press event in Mumbai on Wednesday to launch the trailer for PM Narendra Modi, the upcoming biopic on the prime minister. The film has been directed by Omung Kumar (Mary Kom, Sarbjit) and will be released on April 5, a week before the General Elections begin on April 11.

The trailer gives the glimpse of how the film has covered life journey of Narendra Modi, right from his childhood till he sworn in as Prime Minister of India. Vivek Oberoi is playing the character of Narendra Modi and seems to come energetic and powerful various scenes. Although if observed through the trailer he misses the spark of coming up as an influential and eye catching persona that Narendra Modi actually carries. The trailer seems to grab many issues simultaneously but fails on driving a curiosity as there seems a vague representation of issues without keeping any focus on drawing a particular idea out of it.

There are various issues taken in the film attributed with the life of PM Narendra Modi. Right from being a chaiwala who entered RSS( Rashtriya Swayamsevak Sangh) and paved his way into Indian Politics, Narendra Modi is potrayed as a deshbhakt who fought injustice towards Hindus and had rebelled for their rights. This comes prominent as trailer shows the hit dialogues of Vivek Oberoi, “Hindustan banne ke bad bhi hum hindu nahi ban paaye.”

As per the trailer, after roaming the mountains, valleys and jungles of India in his quest to becoming a sanyasi, Modi finally lands up in a RSS shakha, does his khaki shorts and saffron flags routine and then goes on to play a crucial role as an underground rebel disguised as a sardar, during Indira Gandhi’s Emergency rule.

There are many fans of the trailer but critics are no less. Check few of the significant tweets and memes including Actor Siddharth who takes a sarcastic jibe on the trailer of PM Narendra Modi.