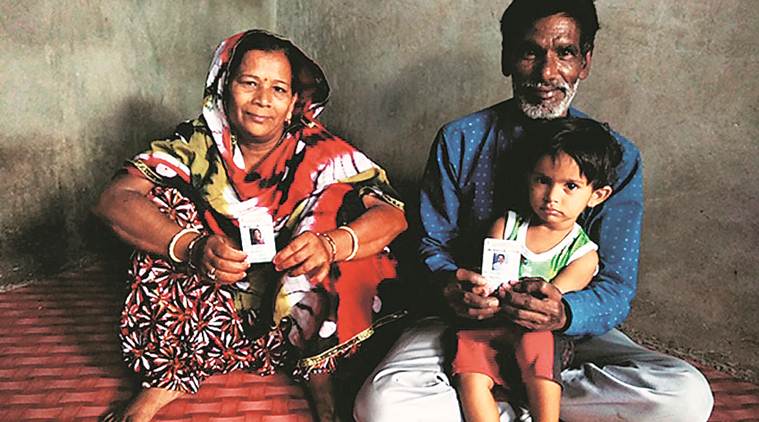 Sexagenarian Dhanji Bagra from Rajkot is excited about casting his first ballot as an Indian citizen on April 23 when Gujarat votes for the Lok Sabha polls.

So is Nandlal Meghnani (52) who immigrated with his family in 2002 to Ahmedabad and is set to vote for the first time in India.

They are among around 600 Pakistani Hindu immigrants living in Gujarat, who have been granted Indian citizenship since 2015, many of whom are first-time voters in India. Having been granted citizenship by Prime Minister Modi, they are united in their support for him.

“I have to support Narendra Modi. He has done a lot for us. He allowed us to stay here (Rajkot), granted us Indian citizenship and enabled us to get employment,” says Bagra who along with his family used to live in Karachi till 2007.

We can’t support (Congress president) Rahul Gandhi. What has he done for us?”He adds: “In fact when the Congress was in power, we faced tremendous hardship here and I could almost have been forced to return to Pakistan.”

A cobbler by profession, Bagra, his wife Bhanbai and their children Meghbai, Jiva and Akash came to Rajkot in 2007, but the couple was granted Indian citizenship only last year. They got their Electors Photo Identity Cards (EPIC) this March, making them eligible to vote in the general election on April 23.

“I was able to provide for my family comfortably in Karachi. But the safety of the family and our assets was always a concern. Women could not venture out alone. Robbery was commonplace,” says Bagra. “After our house was robbed by armed men, my mother, who was born in Mandvi in Kutch district of Gujarat, asked me to leave for India. I heeded her advice. But, she died in Karachi.”

Bagra now sets up shop everyday near a railway overbridge in Bhagwatipara of Rajkot to repair footwear. His home, a one-bedroom-hall-kitchen, is around 2 km away. Now both his sons are working, and his family now also includes his daughter-in-law Kalpana and grandchildren Krishna and Ruhi.

Initially life was tough in Rajkot, Bagra, who has studied till Class I says. “We were on long-term visa (LTV) and needed to find work immediately. But nobody would give us work when we said we were from Pakistan,” he says. “We had no Indian identity despite the fact that we are Maheshwaris, the community native to Kutch.” He says he began repairing old footwear during the day and working as a security guard at a garage at night.

“We would get food one day and go hungry the next two days. We used to live in a hut here, which I rented from a fellow Pakistani immigrant,” he recalls.

The fortunes of immigrants like Bagra looked up after the NDA government came to power in 2014, say leaders of the Maheshwari community. “The Modi government allowed Pakistani Hindu minorities living in India on LTV to obtain an Aadhaar card, open bank accounts and also own property. This helped them find a foothold here,” says K G Kanar, a Rajkot-based advocate who has been supporting the cause of Hindu immigrants from Pakistan.

Bagra’s wife Bhanbai, who has not received formal education, says she too will vote for Modi. “I used to vote in Karachi every election and this time I will vote for Modi to whom we owe everything we have here,” she says in Kutchi.

Like Bagra, autorickshaw driver Shankar Patariya (61) also immigrated in 2007. “I can’t tell you publicly who I am going to vote for, but we must think about the government, which has done so much for us,” he says.

Patariya says he came to Rajkot with his family on a tour and stayed back after taking a liking to the place.

Dhanjee Bhuchiya, who got Indian citizenship last year, echoes Bagra: “It has to be Modi. Seven years ago, even getting LTV extension was a cumbersome task. But now, most of the services are available online. Modi government did away with the requirement to get our Pakistani passport renewed every year once it expires,” the 43-year-old immigrant from Karachi who is now a tax consultant in Rajkot, says.

“Having the EPIC is liberating. I feel I am a free citizen now,” says Bhuchiya, who holds a degree in commerce. “I will be voting for the first time in my life. I never voted while in Pakistan as I feel Muslims there hate Hindus,” he adds. “The atmosphere deteriorated there especially after the demolition of the Babri mosque. We wanted to leave immediately after that, but had no resources.”

Bhavan Fufal, a leader of the Maheshwari community in Rajkot, says a few families immigrated to Rajkot in the early 1990s. Then there was an exodus in 2007 and 2009 from Karachi. Since then, a steady trickle has continued. “Maheshwaris from Pakistan have mostly settled in Rajkot and Ahmedabad, while a few families have gone to Rajasthan,” he says. “Earlier, it was almost impossible to get Indian citizenship as one had to visit Delhi frequently and the process was very slow. But the NDA government, led by Atal Bihari Vajpayee, relaxed norms and made the process for granting Indian citizenship speedier. After Modi took over as PM, the central government authorised the Gujarat government to grant Indian citizenship to Hindu migrants from Pakistan,” Fufal who is living in Rajkot on an LTV says.

The Gujarat government delegated powers to the collectors of Ahmedabad, Gandhinagar and Kutch districts to grant citizenship to Pakistani Hindu immigrants. ”This has resulted in speedier disposal of applications for citizenship. Hence, support for Modi among the community is obvious,” Fufal says.

Since 2015, 490 Pakistani Hindu immigrants have received citizenship in Ahmedabad, 89 from Kutch, 20 from Rajkot and seven from Gandhinagar.

Among those in Ahmedabad to whom the district magistrate granted Indian citizenship after his office was delegated those powers in December 2016, many have become first-time voters now.

Among them, Nandlal Meghnani (52), who immigrated with his family in 2002 and settled in Ghatlodia area of Ahmedabad, is clear that his vote would go to the BJP. “If not for us, then for our children,” Meghani, who has roots in Islamkot in Sindh province of Pakistan, says. “This government heard our voice. Otherwise, it would take 15-20 years to be recognised as a citizen.”

Kirshan Maheshwari (61) and his wife Miran, who live in Vatva area of Ahmedabad, were granted Indian citizenship last December. Maheshwari says they would go by the advice of their community leaders on whom to vote for. “We will vote for whoever Rajesh (Maheshwari, secretary of Sindh Minority Migrants Association, an organisation that works for the rehabilitation of Pakistani Hindu migrants in Ahmedabad) asks us to. However, we are yet to receive our voter IDs,” says Kirshan.

Many immigrants continue to wait for their voter ID card. Pruthvi Maheshwari, a 21-year old from Maninagar, has also not yet received his. “I applied in late February, and filled a form at a nearby school, but I don’t have any update on it yet. Same is the case with the applications of my brother, Lalit (24) and sister Archana (19).” Pruthvi, his siblings, and parents, were residents of Mithi in Sindh province of Pakistan until 2007 when they shifted to Ahmedabad. “While we did not face any problems per se, we never felt at home there. Moreover, all our uncles and other relatives lived here.”

Upon checking with their National Voter Service Portal (NVSP) registration ID, it was found that the online applications of Lalit was submitted only on March 27, and Pruthvi and Archana on March 28.

Speaking about why EPIC deliveries were taking time, Additional District Election Officer of Ahmedabad Chetan Gandhi says, “It is not logistically possible to immediately enter the data of those who registered at schools on our special registration drive. Our first lot of registration was until October 15 last year and the electoral roll was released on January 31. A second drive was launched with the last date of application as March 25. We have a schedule chalked out.”