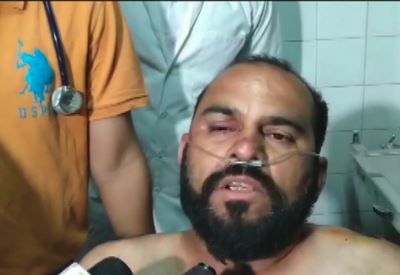 Man who slapped Hardik Patel at a rally in Surendranagar, Gujarat: My wife was pregnant when Patidar agitation happened, she was undergoing treatment at a hospital, I had faced problems then, I had decided then, I’ll hit this man. I have to teach him a lesson anyhow.

Tarun Gajjar said, “Then again during his rally in Ahmedabad when I had gone to get medicine for my child, everything was shut down. He shuts down the roads, he shuts down Gujarat whenever he wants to, What is he? Gujarat’s hitler?

Mahendra Baghedia, SP Surendranagar, Gujarat on Tarun Gajjar (who slapped Hardik Patel at a rally earlier today): The man is not affiliated to any party, he is a common man. Law is taking its own course.

Though, Hardik Patel had recently tweeted that this was an attempt from BJP, today BJP has tried to slap me, tomorrow there lies a possibility that BJP shall shoot me down.