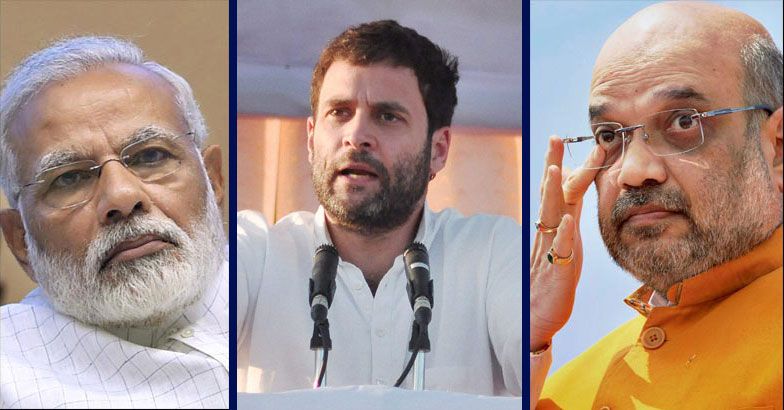 Prime Minister Narendra Modi and BJP President Amit Shah both slamming the Congress-led UPA government for not ensuing the strong tactics after the 26/11 Mumbai Terror Attack in 2008.

An outrageous fact that the Pakistan media and its parliament accepted the action taken by IAF air strike on Jaish-e-Mohammed camp in Balakot of Pakistan’s Khyber Pakhtunkhwa but Rahul Gandhi and Mamata Banerjee don’t want to believe that air strike has done. They should feel ashamed before giving such kind of statements for Indian soldiers. Is this kind of politics need to be played by the opposition leader in such a worrying situation so that Pakistan should feel happy?

The Prime Minister said through the reports that India Air Force wanted to carry out the surgical strike post Mumbai terror attack but UPA block it. The revenge was need to be taken but nothing had happened under the UPA government. “Today we are in an era where armed forces have full freedom to do what they want.”

There were many bomb blasts happened between 2004 and 2014 at Hyderabad, Delhi, Mumbai, Bengaluru and Pune when the UPA was in power but nothing had happened. The nation has an expectation but it completely ruined by the then ruling party.

The strong action has been taken by brave soldiers just after the Uri Attack (First surgical strike) and recently, our brave air warriors did air strike at Balakot to retaliate the Pulwama Terror Attack.

PM salute to those who are serving the nation. Their vigilance keeps the nation secure.

Prime Minster Narendra Modi declared that the country will no longer be “helpless” to face the terror, it’s a “New India” who will pay back terrorist with “interest” and that their influence has been curtailed and will be curbed further.

While addressing a public meeting, The PM greeted Wing Commander Abhinandan Varthaman, saying every Indian is proud for brave commander.

One day after the release of IAF pilot by Pakistan, Modi stated that the meaning of Abinandan will change now. Abhinandan used to mean congratulations in English but nation has a power to “change dictionary meaning.” This is the real strength of the country.

He was captured by Pakistan on February 27 in a dogfight between the two air forces and his MIG-21 was shot down.

Modi said the country has to move ahead with “valour”. Just after his released, Modi had tweeted, “Welcome Home Wing Commander Abhinandan! The nation is proud of your exemplary courage.

However, where the whole nation supports the country’s armed forces, there are some suspect fight for the terror group.

As the Opposition leader are harming the country by giving wrong statement Modi enacted that “Modi will come and go, India will remain.”

“They should clarify- do they believe our armed forces or they believe those forces who support terrorism on our soil?

“We are Indians first and your politics can wait…it is the safety of our nation that is at stake,” the Prime Minister said.

Ahead of an upcoming Lok Sabha elections, country is offering strength against vulnerability, asserting the BJP-led NDA government would provide stability. Hitting the opposition party, Modi remarked that “my only family is 130 crore Indians. I will live for them. I will die for them.”

Amid the debate of alleged ‘politicisation’ of IAF undertook aerial strike, Shah said that nation’s security is BJP’s priority  an election.

He greeted Modi’s role in exposing Pakistan’s real face in front of the world.

“Today Pakistan has been isolated internationally, nobody is ready to support it. This kind of diplomatic victory was brought by BJP’s Narendra Modi government,” Shah said.