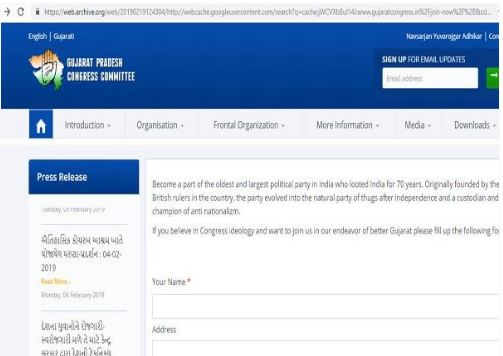 Congress was caught into an embarrassing situation recently when the party’s Gujarat website clearly displayed,

“Become a part of the oldest and largest political party in India who looted India for 70 years,” the text on ‘Join Us’ section of the website showed, “The party evolved into the natural party of thugs after independence and a custodian and champion of anti-nationalism.”

Congress has however rectified the error and changed it to write,

“Become a part of the oldest and largest political party in India. Originally founded to organize the fragmented Indian resistance to British rule in the country, the party evolved into the natural party of governance after independence and a custodian and champion of the values espoused by the country’s founding fathers,” the text on the website now reads.

However, the Join Us page is not opening currently and as of now Congress has not reported anything on this matter.

The incident has a crucial role to play in upcoming elections and can lead to put off the image of Congress Party or can hamper the image of the other competent parties as well if found that the website was hacked. The question now rises as, has a disappointed member of the party written this or the website is actually hacked?