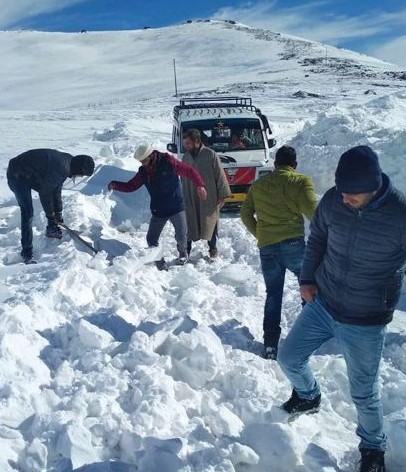 5 dead, 5 people are under trapped as avalanche hits Khardung pass in Ladakh

5 dead, 5 people are under trapped as avalanche hits Khardung pass in Ladakh

On Friday, a terrible incident happened as avalanche hits Ladakh’s Khardung La mountain pass in Jammu and Kashmir. According to reports, 10 people are missing and their vehicle came under the snow including one SUV. The rescue operation is going on for the trapped people.

As of now, bodies of 5 civilians has been found and others are under the rescue operation.

Khardung La mountain pass is gateway to the Shyok and Nubra valleys. The pass is important for Indian armed forces as it used to carry supplies at the Siachen Glacier.  The elevation of Khardung La is 5,359 m (17,582 ft).