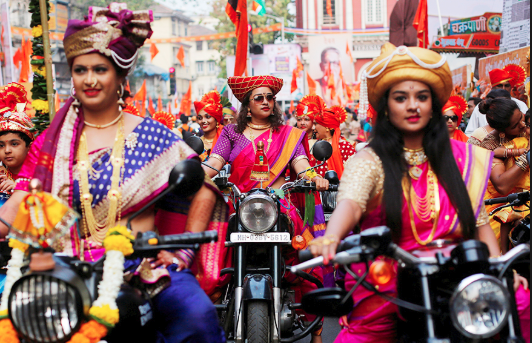 The onset of spring is welcomed by the auspicious festival of Guddi Padwa that marks beginning of New Year for Marathi and Konkani Hindus. Gudi Padwa is known and celebrated widely in South India as Ugadi which is derived from the word Yugadi, meaning the beginning of an era.

Gudis are made using silk cloth, neem and flower garlands, kalash and gathi (sugar candy). The Gudi is known as Brahma Dhwaja in the South and Brahma Dhwaja Pujan is conducted on the day. The Gudi is put up in the house early in the morning on the first day of the Hindu, month of Chaitra to celebrate the beginning of the New Year.

As the festival tunes in with delicious Maharashtrian dishes across Maharashtra, Mumbaikars and Punekars celebrate Gudi padwa with immense fervor and excitement. There are Shobha Yatras taken out on streets of Maharashtra. One such Shobha Yatra is that of Girgaon Padwa Shobha Yatra, one of the biggest and oldest Shobha Yatras in Mumbai. Every year, the highlight of this Shobha yatra is Dr. Aparna Bandodkar, and her bike ‘Bijli; together they have become the face of the Girgaon Padwa Shobha Yatra. Women have been out on streets ringing in tune of the festival oozing their culture with colorful navvaris put on with grace.

Urmila Matondkar celebrates Gudi Padwa in in North mumbai constituency and also meets with the locals. She says, “Gudi Padwa is a very beautiful & dear festival for Maharashtrians. I hope that the festival brings prosperity & peace for everyone. Gudi Padwa marks the beginning of our new year.”Urmila Matondkar joined Indian National Congress and is now campaigning in a very unique way.