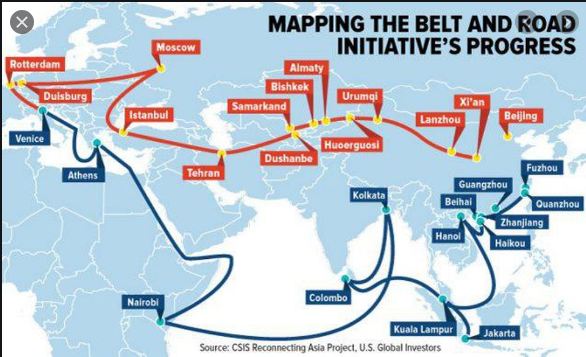 If the then Soviet Union’s attempts to match US President Ronald Reagan’s Star Wars-like defense and space projects bankrupted Moscow in the 1990s, China’s attempts to replace Washington as a global superpower via BRI may bankrupt Beijing. The USSR, led by Mikhail Gorbachev, disintegrated without firing a shot; the People’s Republic of China (PRC), led by President Xi Jinping, may follow suit.

There is a difference, though: even after the dissolution of the USSR, Gorbachev remained a respected world statesman; Xi Jinping, on the other hand, may join the ‘august’ company of barbarian warmongers like Adolf Hitler, Benito Mussolini, and Josef Stalin!

In the end, Jinping, already facing resentment in the Communist Party of China (CPC), may prove to be too-clever-by-half.

His brainchild BRI is now dragging China towards self-annihilation.

According to the Hong Kong-based South China Morning Post (SCMP), a majority of the projects currently underway as part of the BRI are either adversely or partially affected by the COVID-19. The pandemic has claimed over half-a-million lives and infected more than 10 million people globally. And it has reduced China’s global rating and credibility to trash.

The newspaper, quoting Wang Xiaolong, Director-General of Chinese Foreign Ministry’s International Economic Affairs Department, said about a fifth of the projects under the BRI has been adversely affected due to the pandemic.

The USD 3.87 trillion BRI, comprising nearly 3,000 projects, claimed to be aiming to boost trade and investment across Asia, Africa, and Europe and to boost China’s global influence. It aimed at capturing markets, especially in the “Third World”, to be colonized and held captive through a debt-trap to dump substandard Chinese products forever.

But the mighty China has been downed by the invisible coronavirus. Beijing has suffered severe setbacks and global opprobrium due to its role in the spread of what US President Donald Trump identified as the “Chinese Virus”. China is perhaps the world’s loneliest major country, without any credibility. Many countries are either doing a rethink on their China policy or have rejected its overtures and projects as a number of countries encircle the Dragon to tame it.

As of now, about 40 percent of the BRI projects have been “adversely affected”, and another 30-40 percent were “somewhat affected”, SCMP said, quoting Wang.

The BRI was launched with much fanfare by Xi Jinping when he came to power in 2013. The ultra-ambitious plan was scheduled to link Southeast Asia, Central Asia, the Gulf region, Africa, and Europe with a network of land and sea routes. The USD 60 billion China-Pakistan Economic Corridor (CPEC), which connects Gwadar Port in Pakistan’s restive Balochistan Province with China’s Muslim-majority Xinjiang region, is the flagship project of the BRI.

With the indebted countries increasingly apprehensive of the hidden Chinese agenda behind its financial aids and loans, Beijing tried last week to convince them in the first video conference of the BRI as part of its efforts to kick start the stalled projects, including the CPEC.

Since the CPEC passes through Pakistan-occupied Kashmir (PoK’s) Gilgit-Baltistan region, gifted by Islamabad to Beijing, India has not only refused to join the BRI bandwagon but also warned China that its project passed through the land illegally occupied and ceded by Pakistan to it.

Even in Pakistan, some senators had opposed the CPEC, terming as yet another colonization project started by a new East India Company (China). Some other Asian countries, including Malaysia, Bangladesh, Indonesia, Cambodia, and Sri Lanka have recently either stopped or delayed the Chinese-funded projects. Only on Saturday, the Association of South-East Asian Nations (ASEAN) criticized Chinese designs in the region, amid China’s bloody border row with India.

Until now, the pandemic had adversely affected the Pakistan-centric CPEC, Cambodia’s Sihanoukville Special Economic Zone (SEZ) and Indonesia’s Jakarta-Bandung high-speed rail. Many projects under BRI are either on hold or receiving minimal works.

When Xi Jinping became the President, he gave the people a “Chinese Dream”, promising to double their income in a decade and “restore China’s past glory.” His brainchild BRI is an attempt to create a Chinese Empire with infrastructure projects funded by Beijing’s investments. But some countries started reeling under the mounting Chinese debt after Sri Lanka had to give away its Hambantota port in a debt swap to China in 2017 on a 99-year lease. In other words, China’s debt-traps, to the tune of USD 152 billion (2000-2018), began to alarm these countries.

By January 2020, 2,951 BRI-linked projects, valued at $3.87 trillion, were planned or underway across the world, the SCMP said, quoting the Oxford Business Group.

Many countries in Africa and Asia have not been able to continue with mega projects, mostly funded by Beijing, because they are struggling to service debt. For example, a $1.5 billion rail project in Nigeria was delayed because of the COVID-19 disruptions. Many Chinese-funded projects in Zambia, Zimbabwe, Algeria and Egypt were put on hold or may be delayed as the countries struggle to control the pandemic’s spread.

Many countries which that took huge loans from China to build mega projects including motorways, ports, dams and railways have approached Beijing, asking for debt repayment freezes or some debt cancellations. This followed Xi’s assurance to African countries to write off all their interest-free loans due this year.

Also China’s policy banks including China Exim Bank and China Development Bank, which fund most of the BRI projects, are now more cautious in their lending. Even before the pandemic, they were already reducing new BRI loans.