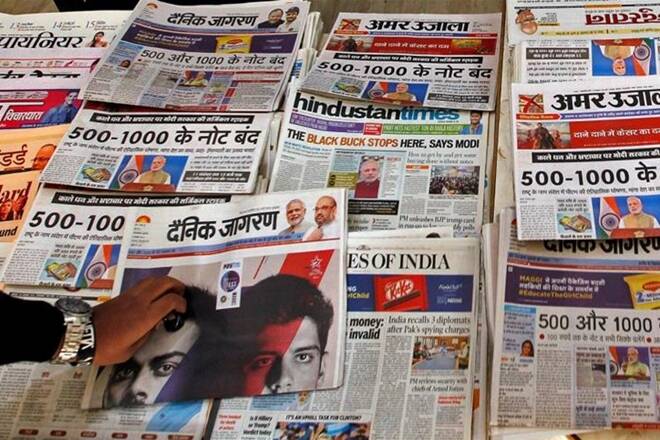 Bengaluru: The ongoing pandemic has also brought its share of woes to the print media generally, the number of copies that were in circulation, decreased because of the initial fear caused by the virus as people unaware of its effect were scared to buy for newspapers. It also had a toll within the institutional sales as offices and, academic institutes were, compelled to pack up. Housing societies advised its members to desist from buying newspapers and issued a blanket ban on the entry of newspaper vendor thereby, causing a severe dent in circulation numbers.

FICCI as per its 2019, The India Media & Entertainment sector reports the medium is worth Rs.1.82 trillion and is growing by 9%.

The FICCI report further adds the TV industry is worth Rs. 788 billion, a growth of 6.5% from INR 740 billion. Whilst advertising constitutes Rs. 320 billion (+5%) and the subscription revenue constitutes Rs. 468 billion (+7%).

The digital medium is giving the print a run its money with net revenue of Rs. 221 billion from its earlier 192 billion (+24%) with advertising revenue contributing Rs. 182 billion and subscription revenues at Rs. 29 billion.

Fourth within the order of revenues were the film industry as it clocked Rs.191 billion. The domestic theatrical revenues Rs. 115 billion, the gross box office revenues Rs. 49.5 billion and the overseas theatricals revenues accounted for Rs. 27 billion.

COVID’19 has brought its own share of problems; the industry is staring at a loss of Rs. 25,000 crore (CRISIL). The industry in entirety is facing unprecedented challenges from the spread of COVID’19. There have been rapid vagaries in consumer behaviour and consumption, work stoppage in content production, annulment of live events and sports are increasingly becoming the order of the day. Films and television producers are stressed to allay the impact of delayed-release schedules and the closure of theatres.

The bright side within the cloud is increased consumption of video gaming and growth within the home entertainment category. According to a report by Kantar, OTT platforms are not any longer a utopian phenomenon as there has been growth in the 45+ age groups.

Few other categories that are seeing an upward trend are online education, broadband and internet, personal and surrounding hygiene, e-commerce and home shopping, health and wellness aside online banking which is validated by the latest report from Ernst and Young (EY) that states consumers are progressing to use online platforms for education, shopping and banking quite ever before.

However other categories are witnessing pre-mankind levels. A web survey of 1300+ respondents during the last week of May 2020 states categories that are more likely to lose call at the decreasing order of consumption are eating out restaurants, public transport, luxury accessories, apparel/fashion, shoes, online meal ordering, movie theatre/events and own transport

Print media is additionally faced with a double whammy as advertisers stopped have stopped portraying their products thanks to low or no intake of products by consumers, barring essentials every other category have placed a hold in advertisement spends.

The print media chiefly the English language dailies is facing a double-pronged attack. To, stem the flow of readers, the publishers even opted for sending the soft copies of the entire newspapers in pdf format to both advertisers and advertising agencies alike on each day to day basis. This not only put a spoke within the wheels of the printed copies but also started impacting the reading habits. Covid19 is redefining the role of print within the media mix. Initially, the pdf copies worked but, when things started normalising readers chose to not buy the printed copies raising concerns among the print fraternity. Few newspapers to stem the excess misuse of pdf copies went behind a paywall and have priced the web edition.

It is also interesting to notice print industry during the previous few days have started observing a slow but steady growth in their toplines as advertisers are returning to print notably in non-metro tier 2 and three markets. Publishers are also pinning their hopes in the forthcoming festival season. However, heavy discounting has become now the norms. Publishers during the initial phase and within the quest to sustain were dispensing 50+ percentage discounts and are slowly now trying to wriggle out of it, advertisers, however, having tasted the blood are unrelenting.

The print media especially is trying their best to urge back to shape and had been requesting the authority to help them in such time of difficulty.

All this wasn’t enough the MIB rather than helping the medium has now proposed a brand-new print media policy 2020 effective 1 August 2020. the target of the policy guidelines is to take care of a list of approved publications for release of advertisements by impaneling acceptable publications.

The new policy is going to be unrolled, by the Bureau of Outreach and Communication (BOC) department. The BOC was formed from the merger of Directorate of Advertising and Visual Publicity (DAVP) with 2, other departments – the Directorate of Field Publicity (DFP), Song and Drama Division (S&DD). BOC is that the focal agency of the Government of India for advertising by various Ministries and organisations of state of India, also as public sector undertakings and autonomous bodies on their media campaign.

The new rules also propose advertisements be based, on square cms. (SQC) from column centimetres (CC). Newspapers already had, implemented this long back and were urging the authorities to imitate. However, the Government wasn’t during a mood to relent and continued to release advertisements in col cms. rates. Incidentally, the last government rates were rectified on 8 Jan’ 19.

The new rule also proposes the Bureau of Outreach to bid directly for programmatic ad inventory on platforms.

The administration to plug the Digital India policy has framed new guidelines by allowing social media platforms with 25 million+ monthly unique users eligible for state advertisements, and have clearly defined what constitutes a social media.

The guidelines states, social media as a platform, web or mobile-based applications, that allows the creation, access and exchange of user-generated content within the type of text, audio-visual, graphics or animation. This move is, going to be music to ears of the digital media and can set the cash ringing for digital because it will give them an entry in Government share. This more will boost digital and further shrink the medium. Till now, government-run ads on YouTube and video streaming sites were released, through private empanelled agencies henceforth it’ll be only from BOC thereby causing strain to the advertising agencies too who are sandwiched between the client and the publishers.

The ministry has also proposed the rates of PSU advertisements in newspapers, which can hit the overall revenues of the already stressed sector. The policy denotes Navaratnas and Maharatnas PSUs also will now advertise at subsidised rates i.e. 1.5, times over the applicable Government approved rate. These PSUs were earlier scheduling advertisements at a commercial, cost which is almost fourfold over the pre-approved government rate. For advertisements of other PSUs, normal BOC rates will apply and the rates are going to be valid for a period of three years from the date of revision

The Ministry of information and Broadcasting (MIB) in its earlier circular in 2016 had made changes for releasing advertisements in print media. A “marking system” policy was, instituted to incentivise newspapers that had better professional standing. Newspapers. Publishers were, suggested to urge the circulation verified by either Audit Bureau of Circulation (ABC) or the Registrar of Newspapers of India (RNI) enabling transparency and accountability while issuing Central Government advertisements.

Print already reeling under the calamity will get to work together. It should look and propose alternatives inevitably the simplest agile that would be to remain united. No more it’s a contest between two print English dailies or between a language and English daily but should be for the entire medium coming together in a shared platform and promote a mix of both print and its digital entities.