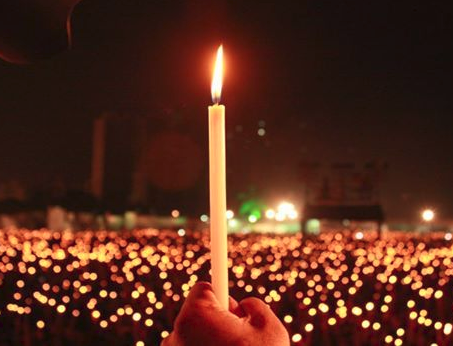 A surge of emotions have taken Gujarat on a wave of justice for jawans. There is a lot of heat in the air as the Pulwama attack have triggered the sensitive sentiments of Indians and their blood is boiling, the overflowing emotions have filled the air with words of “ Ishwar – Allah tero nam and many other prayers in a candle march at Ahmedabad from the Ashram to Subhash Bridge, was organised by Gujarat Congress.

While there are silent prayers in Ahmedabad, Rajkot has done a candle march with loud voices of “Pakistan Murdabad”. Special namaz was held on Friday across Saurashtra and Kutch M K Pathan, who attended the namaz at Bhuj Jama Masjid said,

“Pulwama incident is an act of terrorism and no one will forever forgive the perpetrators.”

tags: Candle march gujarat MARTYRED
previous Navjoth Singh Sidhu makes the most immoral comment on Pulwama Attack!
next Pakistani artists are banned again after Pulwama Attack, is it a cycle? Why were they unbanned after Uri at first place?
Related Posts