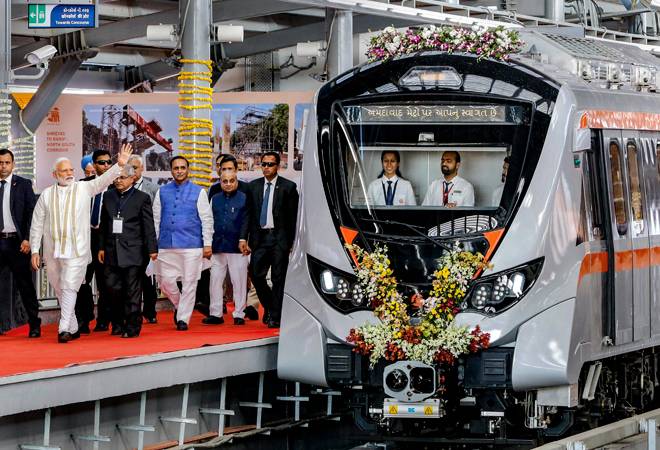 The awaited project of the metro rail operation began in Ahmedabad, Prime Minister Narendra Modi inaugurated the first phase of Metro service on Monday. The service is being effected for citizens from March 6.

The total length of the Phase-I of the Metro Rail Project is around 40.03 km out of which 6.5 km is underground between Kalupur station and Shahpur station and the rest is elevated section. The project connects 4 corners of the Ahmedabad city with 2 corridors and 32 stations.

The PM took a ride from Vastral Gam Metro Station to Nirant cross Road which is approximately 1.1 km. He was accompanied by Chief Minister Vijay Rupani, Governor O P Kohli, Deputy CM Nitin Patel and Union Minister Hardeep Singh Puri along with some school children. He also laid the foundation stone for the second phase of the Ahmedabad Metro. It has been noted that Union Cabinet has approved the proposal of the second phase of the Ahmedabad Metro Rail Project in February this year.

Managing director of Gujarat Metro Rail Corporation Ltd, IP Gautam said that “so far 70 per cent work of phase-I has been done.” Initially. One train will be operating on 6.5 km stretch. Shortly, the second will be start soon in mid-march. It will take one and a half year more to complete the project. The phase II is expected to be operational in September 2019, between Vishalla and Paldi.  “Today is a big day for Ahmedabad as Metro Rail has become operational. It will give a boost to connectivity, and reduce travel time.” he said.

The total cost of Phase I has estimated at Rs 10,773 crore out of which Japan International Cooperation Agency (JICA) has provided Rs 5360 crore and the central and state government together contributed Rs 1990 crore for the project. The East-West corridor will be completely elevated with 17 stations. The underground has 4 stations and the rest 13 are elevated section. Old High Court station will be an interchange station for both the corridors.

The total length of phase II is around 28.26 km which will connect the routes of Ahmedabad to Gandhinagar. The estimated cost to developed this project is at Rs 6769 crore which was approved by the Union cabinet last month. The North- South corridor will have two routes, one from Motera stadium to Mahatma Mandir which length is around 22.84km stretch and the second is 5.42 km corridor from Gujarat national Law University which connects Pandit Deendayal Petroleum University and Gift city. The north south corridor will be completely elevated with 15 stations.

The Gujarat Metro Rail Corporation said that the minimum metro fare would be Rs 5 for the first 2.5 km and Rs 10 for 2.5 to 7.5 km distance. According to this demarcation, the fare from Vastral gam to Apparel Park station would be Rs 10. And the maximum fare from Vastral Gam to Thaltej would be Rs 25 when the entire stretch becomes operational. The East-West corridor zone is being noted the densely populated line of metro rail.