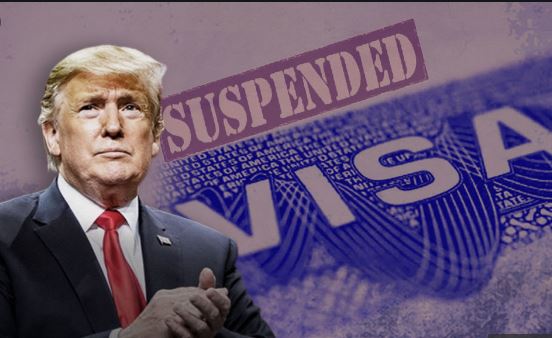 Ahmedabad:  With nearly 50 million job losses since March due to the COVID-19 spread, US President on Monday announced to suspend various categories of visas granted to foreign skilled workers so that local Americans could be given job opportunities and revive the economy.

In an executive order, he suspended issuance of various visas and immigration services, including the H-1B visas, until the end of 2020.

The H-1B visa is mostly used by Indians immigrants to gain entry in the US.

“This move was necessary to help Americans who lost their jobs due to the current economic crisis,” Trump said. The step is seen his attempt to woo voters ahead of the upcoming presidential election scheduled in November. Trump has made immigration as a key matter in his poll pitch.

The White House said the move will benefit workers in America where job losses due to the coronavirus pandemic are at record high. The government data says nearly 50 million Americans lost jobs due to Covid-19. The new order will free up just 525,000 jobs.

This decision will affect not only professional workers but other field workers too. Last year, the US issued 66,000 H-2B visas for seasonal non-agricultural labours.

“This category is Trump’s favourite and visas under this programme are valid for up to three years. Food processing, hotel work and landscaping industries make use of the H-2B visa programme to employ workers for companies in these sectors. In 2019, the US issued 97,623 H-2B visas for both new applicants and renewals.” according to a media report.

The US government issued 125,999 H-4 visas last year, of which nearly 106,162 were for Indian citizens, followed by 5,701 for Chinese citizens. This programme is for the spouses of H-1B and H-2B visa holders. The H-4 visas are valid for the duration of the H1-B visa.

J-1 visa is for people who want to visit the United States for cultural and educational exchange. The US issued 353,279 J-1 visas for both new applicants and renewals last year..

Only high-level and specialised company employees can get the L-1 visa. Last year, the US government issued 76,988 L-1 visas, of which, 18,354 were taken by Indian citizens.