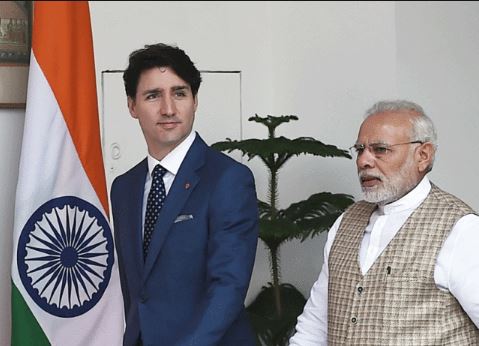 New Delhi: Canadian Prime Minister Justin Trudeau on Wednesday discussed with his Indian counterpart Narendra Modi the situation on the Line of Control (LAC), and the global pandemic COVID-19, in what was the first call from a G-7 leader after the June 16 border clash between India and China in Ladakh which left heavy casualties onboth the sides.

India lost at least 20 soldiers, including a colonel, while China was reported to have 43 casualties. Senior officers of the two countries got back to talks on Thursday to de-escalate border tension, with UN Secretary-General Antonio Guterres appealing for peace.

According to the Canadian PMO, Trudeau and Modi discussed regional and global issues of concern, including the situation along the LAC. Currently, Trudeau is talking to world leaders seeking support for Canada’s candidacy for a non-permanent seat on the United Nations Security Council, elections for which were due on Wednesday.

Meanwhile, the unprovoked Chinese aggression against India flared up anti-China sentiments across the country amid intensified demands for a complete ban on Chinese imports.

Ever since China increased the troops in Ladakh in May, the demand for boycott of Chinese products has been growing. In May, an Indian-made  “Remove China Apps”, developed by Jaipur-based OneTouch App Labs, garnered over 50 lakhs downloads before it was suddenly pulled out from Google Play Store due to alleged violation of deceptive behaviour policy.

The Confederation of All India Traders (CAIT), which has 7 crore traders-members, and 40,000 trade associations, have declared that they will soon launch a massive #BoycottChinese protests.

CAIT Secretary-General Praveen Khandelwal said the protest will be carried out across India to motivate Indian traders to stop selling Chinese products and encourage Indian products.

A few days ago, The Twitter account of the Gujarat Cooperative Milk Marketing Federation (GCMMDF), which owns the Amul brand, was blocked briefly after an advertisement post targeted China. The cartoon apparently called for a boycott of Chinese products.